Today, there are two general types of laundry bleaches on the market – “chlorine bleach” and color safe, non-chorine bleach.  When you want to keep your white clothing really white, or you want to totally eradicate a tough grape juice stain, you reach for the bleach.

“To bleach” means “to remove or lighten color,” and by that definition, there are many chemicals that are technically “bleaches.”  But the two we are probably most familiar with are chlorine bleach and hydrogen peroxide.

A Sanitary History of Bleaching
Thousands of years ago, people still wanted their whites to stay white.  The Egyptians fought grunge by vigorously scrubbing and then sun-drying their garments.  They didn’t have any chemicals to rely on, only the burning light of the sun.

By 1000 A.D., the Dutch had become the “experts” in laundering clothes and keeping them white.  They washed their clothing using a mixture of lye, a very caustic alkaline solution that basically destroys whatever is dirtying the white fabric.  Unfortunately, it often destroyed the fabric itself.  So, the Dutch “cut” the harshness of the lye mixture by adding some sour milk, which softened the effects of the lye.  However, the entire process took up to eight weeks!  That’s a long time to wait for your laundry to get done.  And who wants “clean” laundry that’s been soaked in sour milk?

In 1772, German-born Swedish chemist Karl Wilhelm Scheele was the first to isolate the chemical element “chlorine”, which can be found in the Dutch launderers’ lye (sodium hydrochloride.).  Chlorine became an essential ingredient in subsequent modern bleaches.  It wasn’t until nearly 40 years later, however, that English chemist Sir Humphrey Davy gave chlorine its name, derived from the Greek word for greenish-yellow. 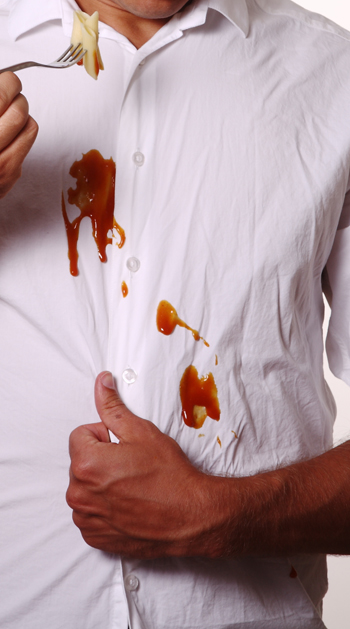 Sodium Hypochlorite (“Chlorine”) Bleach
The chlorine bleach in your home is probably kept by the laundry, because laundry is where bleach is most commonly used.

“Chlorine bleach” is a compound that includes the element chlorine – a more scientific definition is “sodium hypochlorite”.  The bleach you buy at the grocery store is a 5.25-percent solution of sodium hypochlorite mixed with water.  When you see how bleach can destroy even a tough grape juice stain, you know it’s some powerful stuff.

Chlorine bleach was first introduced to American consumers in 1916.  Today, bleach is used in 4 out of 5 households.  Bleach provides a variety of benefits.  It decolorizes stains by oxidizing the compounds that form stains.  Moreover, it aids in actually removing stains by breaking the stain into smaller units which are then more easily removed by laundry detergent and the mechanical action of the washing machine.

When used as a laundry additive, chlorine bleach effectively cleans a variety of fabrics.  However, it should only be used to wash color-fast items.  Otherwise your favorite blue shirt could become your favorite blah rag.  Label directions provide instructions for determining the color-fastness of washables.

Using Chlorine Bleach Wisely
Just because bleach is familiar doesn’t mean you can handle it carelessly.  Bleach labeling bears important safety information and instructions to prevent ill effects.  For instance, the labeling indicates that bleach should not be mixed with other household chemicals such as toilet bowl cleaners, rust removers, acid, or products containing ammonia.  To do so would cause the release of hazardous gases.  So, keep your cleaning products separate and clean with what you know. 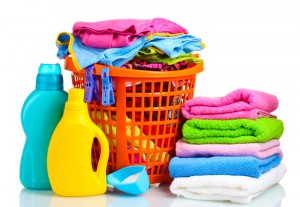 Bleach for Colors:  Non-Chlorine Bleach
What do you do if you want the stain-fighting, brightening power of bleach . . . for your purple dress?  If you want to keep your bright cherry jammies red, and your sunny socks yellow, you want a product that protects the colors of your fabrics.  Non-chlorine bleach is an excellent alternative for color fabrics.

Hydrogen peroxides, perborates, and percarbonates are the most common non-chlorine bleaches.  They come in powder and liquid forms, and can be a component in laundry detergents.

With the growing trend of fabric care products, and further developments in bleaching and color-brightening, it’s easier than ever to keep your white clothes white, your colorful clothes bright, and everything wonderfully clean!