The golden rule of solubility is that like dissolves like.  In other words, polar solvents dissolve polar materials, and non-polar solvents dissolve non-polar materials.  Polarity results from a separation of charge, so hydrocarbon solvents, such as hexane, are non-polar because the electrons in a carbon-carbon or carbon-hydrogen bond are almost equally shared between the two atoms.  In contrast, for a carbon-oxygen or hydrogen-oxygen bond, the oxygen pulls the electrons closer to itself, making the oxygen more negative and the carbon or hydrogen more positive, creating polarity.  Polar solvents typically contain oxygen, nitrogen, sulfur, or chlorine atoms.  Structures of many types of common solvents are shown below. 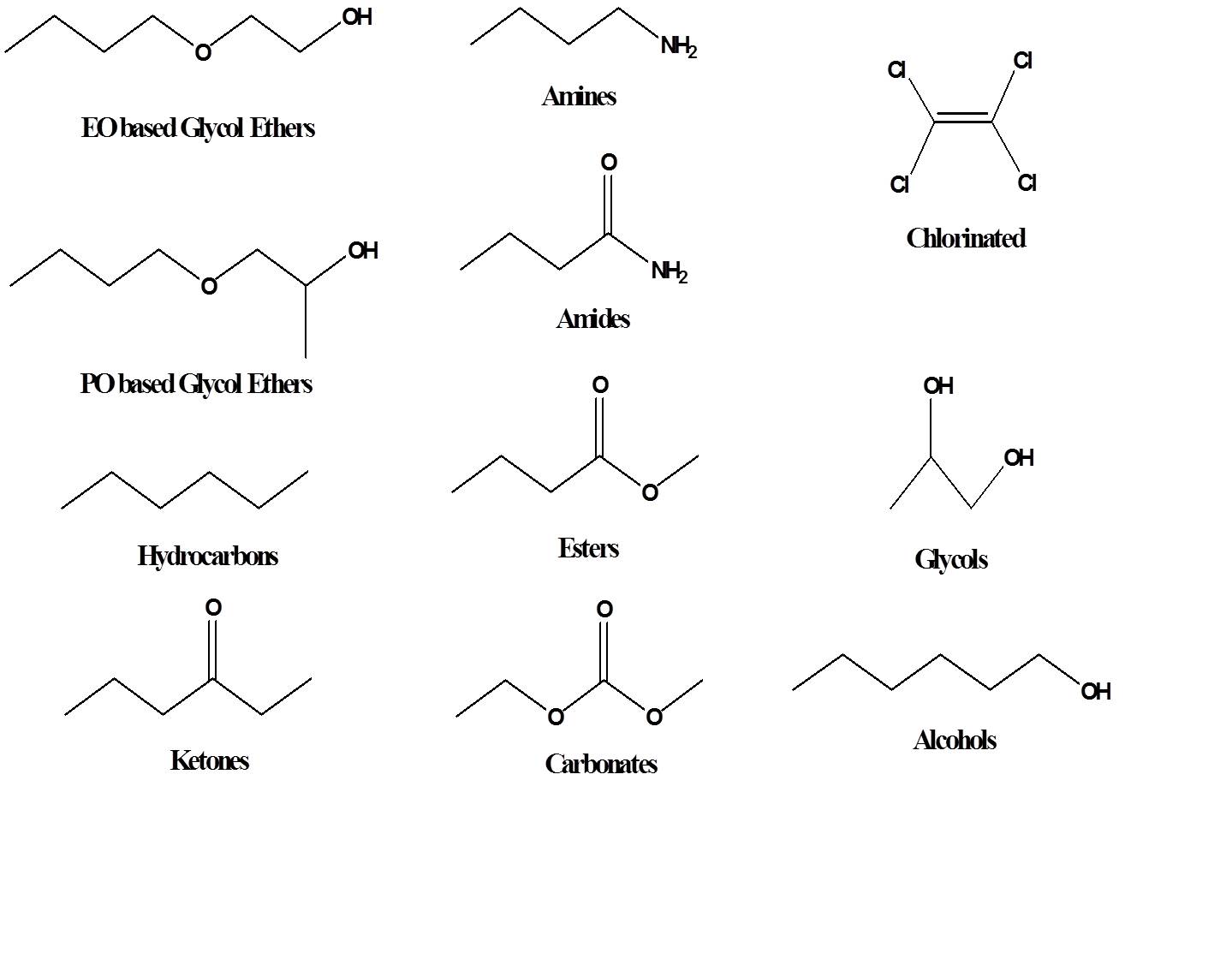 Water is the most common solvent and is sometimes referred to as the universal solvent because many materials are known to dissolve in water to some degree; however, since water is extremely polar, many organic or oily type materials have little or no solubility in water.  For that reason, polar organic solvents are added to water-based cleaning formulations to help with removal of oily soils.  By far the most widely used polar solvents are the oxygenated solvents such as alcohols, glycol ethers, esters, ethers, and ketones.

Polar organic solvents are used in water-based cleaning because of their dual ability to dissolve in water and penetrate oily soil deposits.  While short chain alcohols and glycol ethers are polar compared to hydrocarbon solvents, they are far less polar than water.  It is this intermediate polarity that makes these materials so useful in cleaning applications.  The solvents are polar enough to be completely miscible with the bulk of the water based cleaning product, yet also non-polar enough to be able to penetrate oily soil deposits.  These solvents naturally partition between the soil and the bulk cleaning solution according to the relative solubility and relative volume of these two phases.  Given that the volume of cleaning solution is large relative to the volume of soil, and given that only the solvent that penetrates the soil actually acts on the soil, relatively high concentrations of solvent are necessary to provide the desired cleaning benefit.  In spite of this drawback, solvents are commonly used for their ability to penetrate and swell oily soils and reduce their viscosity.  This allows them to effectively wet the surface and break apart soil deposits which exposes more surface area on the soil deposit increasing the efficiency with which the other components of the cleaning solution can act on the oily soil.

Solvents are also included in cleaning products for reasons other than soil removal.  Specifically, solvents are often used for their ability to couple together components of a cleaning product which might otherwise be insufficiently soluble in the balance of the product to remain in solution.  The incorporation of solvents in products of this type prevents the product from becoming hazy on standing and ultimately separating into two layers.  Solvents are also used for their ability to modify the viscosity of a cleaning product, making an otherwise very viscous formulation pourable.  Finally, solvents are used to enhance the evaporation rate of cleaning products from a surface that has been cleaned.  The most common example of this type of use for solvents is glass cleaners, almost all of which contain one or more organic solvents.