A chelant, sometimes referred to as a sequestrant or a builder, is a specialized molecule designed to bind to positively charged metal ions, most commonly calcium and magnesium, in solution and thereby prevent these ions from forming insoluble precipitates with other ions that may be present.  There are two basic types of chelants, designated as hard and soft:

Calcium and magnesium ions also form insoluble precipitates with many anionic surfactants, most notably fatty acid carboxylates (soap).  The formation of calcium soap complexes is so efficient that the concentration of free surfactant available for cleaning is reduced to effectively zero until all the calcium has been removed from solution, either by chelation or by forming the insoluble soap adduct.  Without the chelant present in a cleaning product more surfactant would be necessary to ensure that an effective concentration of free surfactant was available for cleaning.  In other words, the consumer would have to use more of the cleaning product to obtain a desired result.  Further, the insoluble calcium soap adduct would precipitate from solution onto the surface to be cleaned leading to a dingy appearance and a stiff feel on the washed fabric. Thus, chelators used for these purposes are sometimes referred to as “builders” as they help build upon the performance of the surfactant.

In addition to softening the water of the cleaning solution, chelants are also effective in removing some stains, especially those that have a high calcium concentration like cheese stains.  Stains have a complex and varied molecular structure and many include metal ions cross linking and stabilizing the stain structure.  Chelants present in the cleaning solution will bind with these various metal ions helping to remove them from the stain thereby weakening the stain structure and facilitating its removal.

Beyond calcium and magnesium, chelants bind with all polyvalent metal ions in solution.  Iron and manganese, although less prevalent, can also lead to significant cleaning problems including the formation of insoluble precipitates such as iron oxide, rust, and manganese dioxide.  Therefore, specialty cleaners are often formulated with highly efficient iron chelators to bind with these ions, again eliminating the problems they might otherwise cause…or in helping to eliminate rust and iron stains that have already formed.

The table below shows many examples of chelating agents used in formulated products and their theoretical capacity to bind with or sequester calcium from water to improve cleaning performance: 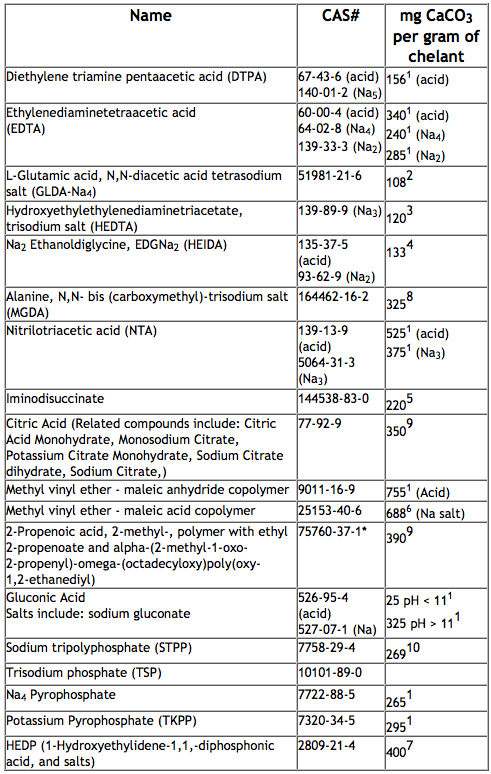